Massimo Bottura and my Bellavita experience 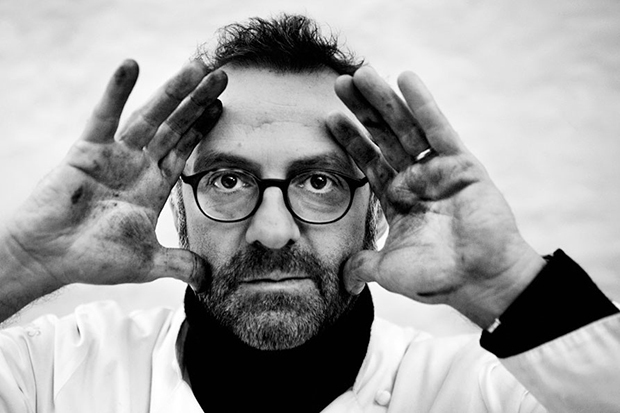 It’s a weekday morning in London and I’m having a contemplative espresso (a coffee that helps you gather your thoughts) in Ottolenghi’s after flying in from Bologna. I’m reflecting on a strange dream I had in a universe where Italian grandmothers were front page of the Rolling Stone-esque rockstars who were legendary both for their cooking and their Richard Branson style antics (think jet-skis and hot air ballooning). I imagined swarms of paparazzi with telescopic like camera lens who were invasively trying to capture their next recipe.

The surrealism of my dream lead me to think about the genuine existence of the modern rock-star chef, often male and rarely older than sixty, and how, in contrast, there is an entire class of cooks devoted to perfection that is completely neglected by our media: grandmothers.

After this thought, a contemplative espresso became a third round, and I was having a flashback. Now.. It’s a weekday morning in Modena, Northern Italy, and we were travelling in the tomato ripening warmth to meet a group of grandmothers who had one job: to create the perfect tortellini. 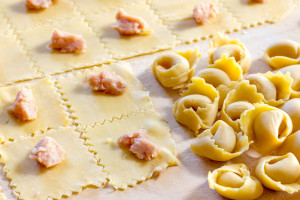 When I met them, I was astounded by the sheer devotion combined with their admirable and.. somewhat intimidating work ethic. Before seing them work, one might unknowingly patronize them by suggesting that they shouldn’t work so hard, until you see their strength and commitment. And the end result? Blissful.. Obviously, I took notes. So who was recipient of these tortellini? You’ll find out in a bit…

Back in London, I was preparing for my visit to the Bellavita festival, the largest Italian expo to be hosted outside of our fashionable boot-shaped country. I was in awe of the sheer scale of it all! The quantity of stalls showing off their DOP ingredients was impressive, and what was formerly the business of exhibiting the recipes of grandparents has turned into an empire!

For the non-Italian speakers amongst us, ‘bella vita’ translates in English to mean a ‘beautiful life’. As I roamed around 6000m^2 of exhibition space and observed an abundance of stalls offering wine, cheese and cured meats tasting, I couldn’t disagree with the festival organiser’s definition of a wonderful existence.

Despite its size, there was a fantastic atmosphere that offered more love than the puppets from the Dolmio adverts! For that reason, it was an honour to be a judge. I thoroughly enjoyed conversing with those who ran the stalls, many of whom represented small suppliers who were part of a family business, passionate about what they were exhibiting in London.

Out of this inspiration, it was from these people that I would gather my ingredients to prepare what would be my own presentation on the main stage; not only was I a judge, but I was also part of a select group of 9 chefs who were chosen amongst the best Italian chefs in the UK, and I would share that stage with Francesco Mazzei and the legendary Massimo Bottura, who I had the pleasure of working with when I was a chef at Osteria Francescana.

For the most acclaimed dish of the event, I gathered onions from Giarratana, Acquerello rice, Bergamotto, Fresh Italian basil and classic Parmigiano Reggiano, to make a North meets South Italy within a plate of Risotto. You may or may not know this, but the cultural divisions between the north and south of Italy are more pronounced than, say, the north and south of England (what is a chip butty?)

After my performance, I would take off the microphone and would eventually join the audience whilst they eagerly waited for the man who was arguably the star of Bellavita in London; Massimo Bottura sought to break more ground in his work on textures by presenting a modern lasagna, combining a crispy triple flavoured sheet of lasagne, a besciamella foam and an orgasmic (yes, it’s an after the watershed blog) ragu. It was exciting how whilst I was there in Modena, we were discovering and experimenting with this. 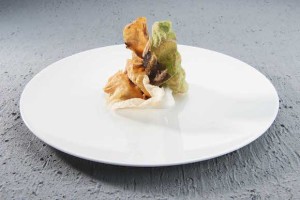 Many outside of the audience’s seating area, including those just working in festival, stopped what they were doing to observe the man who has recently been given the accolade of running the world’s best restaurant. His performance was characteristic of an artist; he operated within within his own world of thought and did so without compromise.
He was a modern rockstar chef.

The presentation brought back even more memories on-top of those I had in the morning. My first memory was when I was making a salad in our pristine kitchen in Osteria Fransescana, combining Roman lettuce with thousands of subtly hidden flavours.
Massimo entered the kitchen, and screamed
‘ STOOOOOOP…. (running around the kitchen)’ but he would lower his voice into a more compassionate tone to ask ‘ What do you see when you close your eyes? Close them’

‘ NO!’, Massimo interjected, ‘ You have to dream about the salad. And only then will you understand how this dish works’. 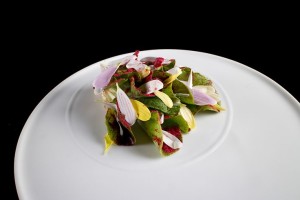 From that point on, I knew working in Osteria Francescana would be a different experience. The restaurant was devoted to an artistic vision of perfection, to the extent that I spent a lot of time in a UV room with round black goggles ensuring that our shell-fish were flawlessly white upon presentation.

In contrast to Mugaritz with dozens upon dozens of staff, I intimately worked amongst ten chefs in Francescana, all of whom would feel like family. Somewhere in the middle of our 18 hour shifts we would find time to play football and have amazing food together.

Many of the ideas that I’ve come to hold close to my heart came from that kitchen, and it came from working with a man who had such an amazing character. But, in the end, we are indebted to our influences, and the beauty of ideas is that they have the ability to pass on like genes. We stand on the shoulders of giants. Do you know who those grandmothers were perfecting their tortellinis for? It was for Massimo Bottura, the rock star chef, a rockstar who was humbled by the experience offered by these wonderful women.